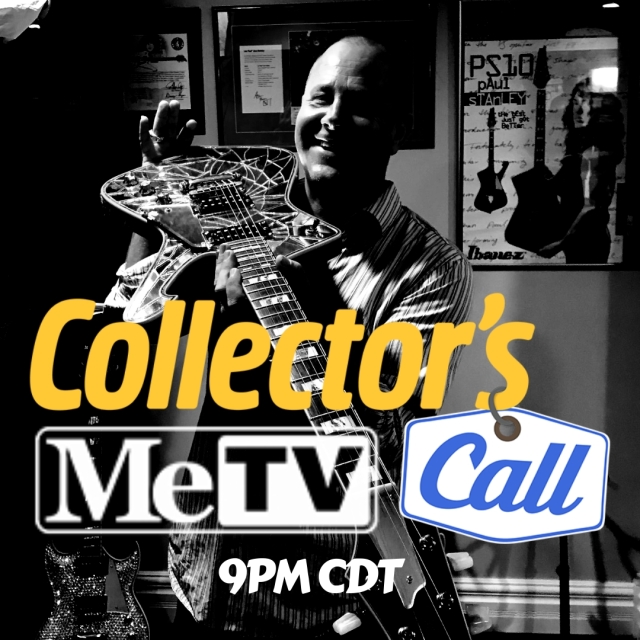 Zach had just about everything I don’t, I was transfixed by the scope of the presentation; a full basement dedicated to the history of the band. My favorite part of the day was when Zach unveiled his custom made KISS road case in which he cherishes all of KISS’s albums, on vinyl. Though not a fan per se, Lisa was struck by the fact that the guys had done 4 solo albums at the zenith of their true heyday in 1978, remarking “wow … so that had to have caused some friction in the band … whose sold best? Ahh… from the mouths of babes. Zach was quick to explain the situation.

I really hope the show is a huge success because Lisa and everyone involved in the production are awesome, please share with your friends! 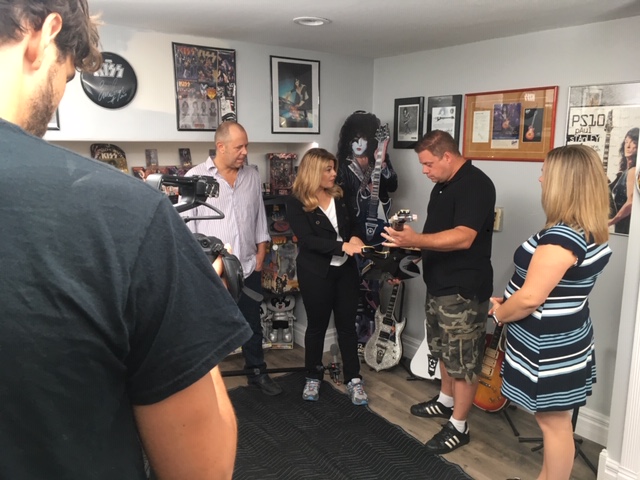 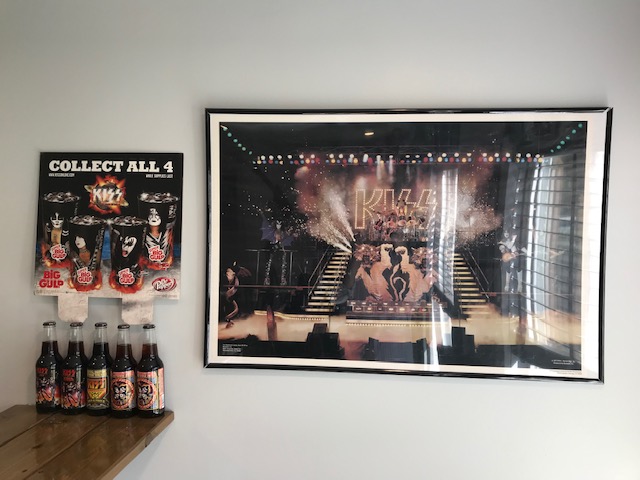 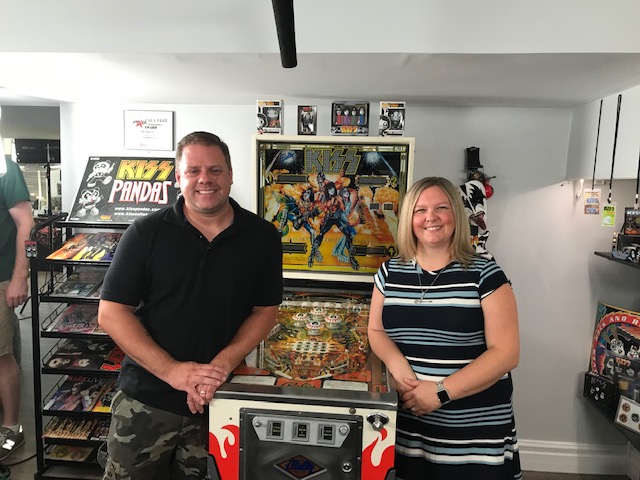 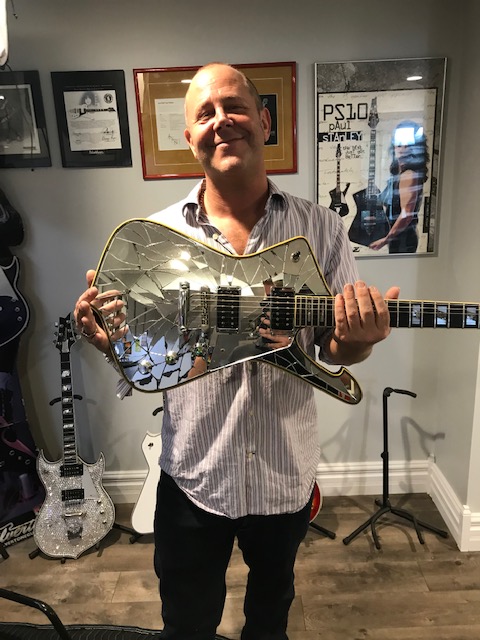 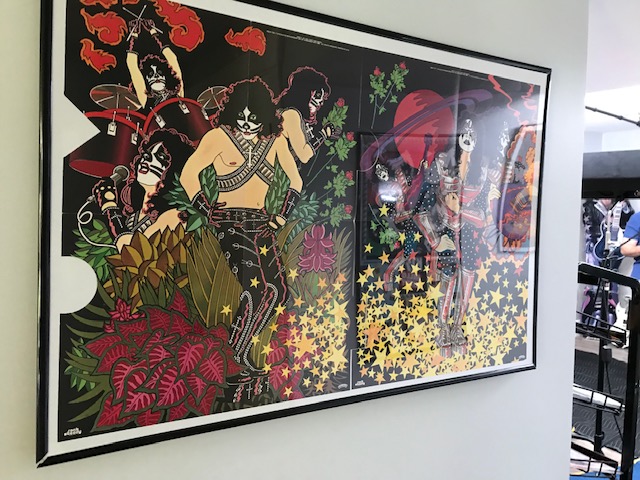 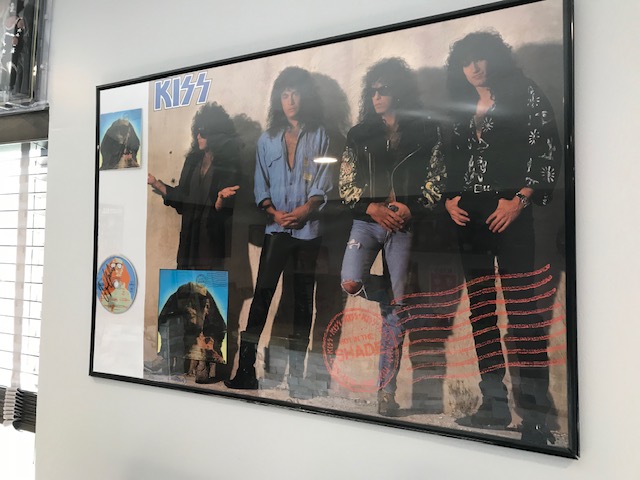 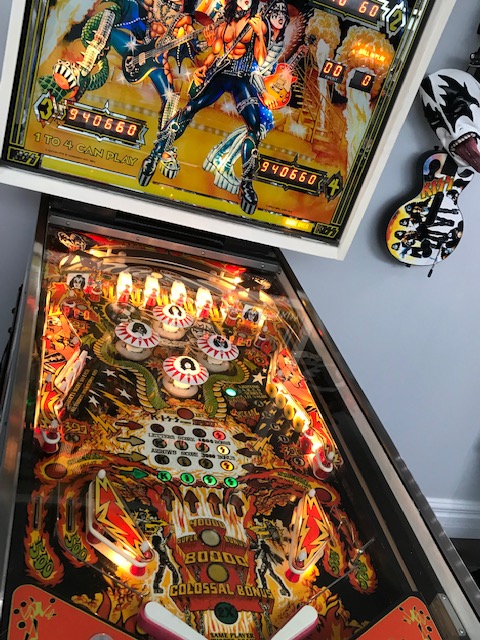 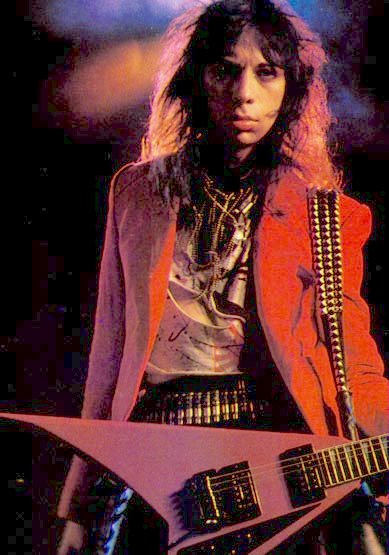 In fact, he was never even in the band (save performances, recordings and songs), let alone a ‘fan’ if you get my drift. Through years of futile legal wrangling with his masters (KISS) for alleged royalties due, we had long known that Vinnie Vincent never signed his contract with KISS. But, in a recent episode of the perennial KISS-podcast ‘Three Sides of The Coin’, former New England drummer Hirsh Garner added some long-needed color to the murky period in KISStory by dropping a bomb shell: Gene Simmons & Vincent were still talking after the Lick It Up Tour and that, if his memory serves him, Simmons was negotiating to keep Vinnie in the line-up?! OMG!!

I am not alone in KISS country when I say that we had always been led to believe that Vincent was fired (or since he wasn’t actually on the books, “let go”) immediately after the Lick It Up tour. It had been, to hear KISS co-founders Gene & Paul Stanley tell it, a unanimous decision, he had to go …but apparently that was not the case, not initially anyway. In KISStoric terms, this is nothing short of revelation for, on the 8th day, it appears Vinnie still had at least one of the two KISS leaders ears in the Demon; Gene Simmons.

Who knows if Stanley was even in on this conversation? Knowing what we do about the cunning head-strong Simmons, it’s entirely possible he sought to right the ship mono-e-mono, get Vinnie on board, and then reach out to Sir Paul with the (tempered) good news that the shrew had in fact been tamed. But, of course, it’s entirely possible also that Paul was in on the convo and told Gene something along the lines of “if you can get him in line, have him sign the deal, and I don’t have to deal with him moving forward ….I’ll give him a final chance with the new record and see how that goes, otherwise I am done with Vinnie”. 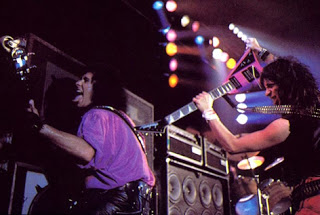 Either way, it’s now clear Vincent must have put quite a strain on the already flagging relationship sans make-up between the Starchild and Demon. Chances are Gene & Paul were not on the same page because, after Vincent left, Gene went semi-MIA for Animilize, leaving Paul to teach guitarist Mark St. John how to hit a mark and then cobble together the album on his own while Gene chased dragons in LA and beyond.

And who knows where Gene’s head was as he sat on the phone with a now AWOL Vincent who was cutting new songs with members of New England? It’s possible Gene was considering cashing in his chips on KISS entirely if he couldn’t get Vinnie to stay. It would of course have been a betrayal of KISStoric proportions that would have weighed heavy on his mind at the time. Sure, LIU had been a success on several levels, but another change at lead guitar? when they had just re-invented the band and brand and saved their (the) Elder worn hides by finally unmasking?  The fact is half the KISS Army had already defected long ago, and new, more fickle MTV generation fans wouldn’t actually care who was on lead in KISS on Animailize. Still, must have been a serious concern ….. jeez, how we gonna spin this one? 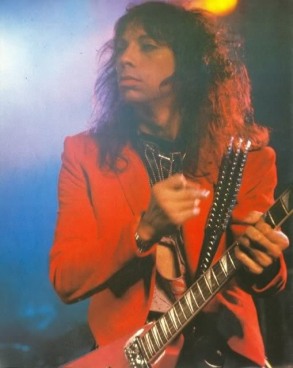 It’s also possible that Gene just wanted a few of Vinnie’s tunes for the next record, as a compromise deal if Vincent was in fact leaving. Vinnie had significantly updated their sound and Gene may have come to believe they really needed him. For all we know Gene threatened him with his royalties as the ante? In any event, both he and Stanley had leaned on Vinnie hard for tunes on Creatures of The Night as well as Lick It Up. Heck, they would even bring him back in to the fold again to co-write on the bounce back Revenge in ’92. See, Vinnie wasn’t in KISS but, for all intents and purposes, strangely was KISS in 1983. It must have been a scary time. I believe Gene feared the worst; that losing VV would be their death knell.

Almost unbelievable to learn now that Vincent wasn’t so much involuntarily discharged from the KISS Army as he was a defector. He had had a choice and what fascinates me most is where his head was at the time, or all along. Thanks to Gardners’ inadvertent revelation, it now seems to me that from the very start Vincent simply saw KISS as his ticket. When he got involved with the band circa-Creatures he saw a sinking ship. He would use what wind was left in their sales to gain personal notoriety and, once he had destroyed the Simmons / Stanley alliance from within, leave KISS in smouldering ruins as the sole survivor to launch the insane vision that would become the Vinnie Vincent Invasion, a telling moniker in hindsight. He probably felt he had saved the band and, my best guess is, may have pushed for equal partnership and it backfired? In any event, he thought he could play Gene & Paul off against each other and ultimately hold them for ransom, and it almost worked. Were it not for cooler heads, KISS might literally have been KISStory because, with Vincent, it seems Armageddon was just a matter of time …plus, everyone knows, three’s a crowd. But don’t listen to me, Vinnie gives us the finer points in this interview from ’86 …”the common denominator” >

Oh, the power of the world-wide web. Three Sides Of The Coin, a 3-person hosted, low-fi, webcam podcast available on iTunes, their Youtube channel et al just celebrated their 50th episode and are hands down the definitive KISS podcast. If you live under a rock or just discovered Kiss, then take a deep breath and start working your way through their archive and CHOOSE ONE!  In a fractured ranks divided into many camps, Three Sides Of The Coin bridges the gaps and goes into the void, fists up, mending fences and finding common ground in understanding KISStory.

Since starting their three-sided fanatical volleys have been shared lovingly by KissAsylum.com, the Kiss fans long-standing stand-bye. Each show is just over an hour or so and they also have had some amazing ‘well-in-the-kno’ exclusive guests and, in a very short time, have managed to provide a one-stop-shop for the real deal in a no spin zone the descerning fan can appreciate.

The 3-Kissketeers, which includes the increasingly giddy renown rock critic Mitch Lafon, former Kissonline.com founder with the actual band KISS / marketing guru Michael Brandvold and, for no reason immediately apparent, Tommy Sommers, a regular guy real estate agent from Minnesota who brings it all down to earth here and there with the occasionally necessary “what a minute, can you explain?”

It all just works very well. They get along but also aren’t afraid to disagree and each has a unique perspective that works great in the simple three-window format which, to their credit, they could have done online without the visual. But instead, they bring us into their worlds in a format that makes it pretty hard to hide your feelings once you have watched someone for a bit. But, in their defense, there is so much to argue about!! And they do it for no other reason than that they are fans and what we get (for free it should be noted) is a glorious weekly intrusion into the psyche of three Kiss fans beyond help on the eve of what looks like Kiss’s induction finally into the Rock & Roll Hall of Fame and a possible re-union of the four original cats no less!

I imagine mega-fans of other mega-bands would do well to take note of the simple formula as a solid template. Our undaunted brethren have covered a lot of ground already but I am hopeful they can keep it rolling as long as they can stand because it’s helping LOL!!!  Not to diminish some of the great stuff that folks like KISSfaq.com, DecibelGeeks.com and podKISSd.com and others have done, but for me Three Sides Of The Coin has managed to capture what it is to be a card-carrying KissArmy member and deliver hot content week after week, especially with the enthralling guest segments like epsiode #50 with That Metal Show host on VH1Classic Eddie Truck.

Or watch this episode in which the boys “sit down” as it were with the first KISS (former) member Bruce Kulick to recognize the show for what is: perhaps the best place to talk Kiss and reach the real fans. My guess is it won’t long before each band member is coming on the show and my guess is the next man up will be either Ace himself or the new ‘Spaceman’, Tommy Thayer, who recently sent in a note to the guys that they read on the show. How would be cool to hear Tommy actually talk and see him interact so we can get to know him a bit more, or Eric Singer for that matter?