KISS Nation should demand the boyz seal these ten Gene master strokes up immediately in a time-capsule. I cannot put them in any order of import; no mere mortal could possibly extrapolate such calculations (not safely anyway). 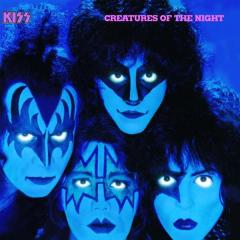 WAR MACHINE – Creatures of The Night – This may have in fact have been recorded “On The 8th Day” because it is freakin’ god-like rock. The intro guitar riff is a couple of light years ahead of its time; hard to believe songsmith Bryan Adams could have had anything to do with the song, but he did. Gene’s growl says get the bleep out of my way or get run over by the biggest drums on earth, ever (thanks Eric Carr) and stands as a testament to Gene’s mastering of the ‘monster plod’. When he sings “draw the battle lines” it’s so evil, so infectious, that I literally wish to rule the world briefly. Terrifying. The gut-check guitars in the verse and the sheer space allowed for the drums to resonate ’till the next A-chord bruises another rib is downright primal. If “War Machine” doesn’t get your blood boiling you probably have never ‘rocked’ anyway. While we’re at it, it bears mentioning that there isn’t a bad track on Creatures; get it.

GOIN’ BLIND – Hotter Than Hell – Of the early Gene songs this is by far the darkest offering, in both lyrical content and musical tone, though “Watchin’ You” (off the same record) comes as a close second. When I was a kid, I couldn’t listen to “Goin’ Blind” because it troubled me, as it should have: it’s about a 93-year-old man in love with a 16-year-old. No question, it has a palpable desperation about it. The stark imagery, slowly developing minor chord melody, grungy mix and Gene’s straining lead vocal (“BEEE_EEEEEEE”) make for a heady, gut wrenching brew that exposes Gene’s British Invasion bug.  To me, this is the song that qualifies Gene as an artist to be reckoned with. It’s all too wonderful; maybe the darkest ballad of all time!!  Ace’s solo work throughout the track alone make “Goin Blind” a top ten Kiss song in this rock soldiers book. Yes, it’s Gene the bohemian artist.

ANIMAL – Sonic Boom –  Okay, I know, it’s not ‘Klassic KISS’  but you coulda fooled me, or anyone who cares. It’s a ruthless mother of tune that recalls Gene at his very finest, declaring independence and little remorse for his prey – probably the best tune he’s written in 20 years. It just sounds so damn urgent one has to wonder what buttons Paul Stanley must have pushed to awaken the Demon’s ire. Too bad he couldn’t have mustered something like this up for Animalize; the album might have been even a bigger success for the boyz. How does a 60-year-old man write a rock riff this cool and have it not sound like anything else? The “Almost Human” refrain in the break is a real nice touch and Tommy Thayer lays down the law on arguably his best lead on the bands most recent opus. Conviction? Guilty as charged.

MAN OF A THOUSAND FACES – Gene Simmons – When KISS ruled the world the gods decreed there be four solo Kiss albums, and so it was. Gene’s ego was approaching supernova at the time so it was probably for the best, and maybe why “Man Of 1.000 Faces” was so perfect then and is so perfect now. It’s like a personal Gene Simmons brand statement / warning of things to come, and it’s a great song that took some guts. The first-person revelations and  horn arrangements in the verses roar into an anthemic Beatles-inspired chorus that sounds more like a Broadway encore than a KISS song. It really shows Gene’s ability to tell a story and, in this case, an apparently spot on autobiographical one that paints Gene as a new hero to root for.

NAKED CITY – Unmasked – Okay, the record leaves a lot of folks with a poppy “what happened to KISS” taste in their mouths but it is, in hindsight, a pretty good record, largely due to the three Ace tunes on it. For some reason though, “Naked City” always felt strangely ultra-sincere to me in relation to the rest of it. So many departures on it including Gene’s falsetto and a quasi-reggae groove guitar line that came off like an entirely new KISS branching out. And, for all its cliche imagery, somehow Gene is able to sell us on the bleak reality of the ‘naked city’. With Kiss waning in popularity in America at the time, perhaps in some detached mercenary sort of way the song was about the fact Gene knew the band may be left for dead stateside. Was it all over?  Gene even asks the question in the veiled lyric “Is there no tomorrow?” 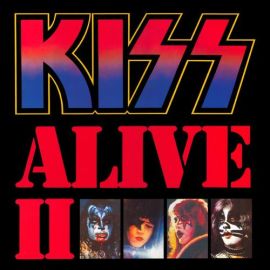 LARGER THAN LIFE – Alive II– LTL is just that, KISS at their 70’s zenith, in a position to audaciously release their second double-live record in just three years! But it gets better; side four included some new material that made it a ‘must have’ (like all KISS). The best Gene cut on it is “Larger Than Life”. Gene’s voice is flat-out menacing and the Bonham-esque groove Peter Criss lays down makes for one of the very best rock moments in KISSstory. I would say it’s easily in any true believers’ top ten as far as studio recordings go ‘cuz there are so many cool things exploding in your face. So dry. So crisp. So tight. So raw. So Gene. I hear a cool reworking of The Who’s “The Seeker” riff with heavier guitars, a Beatles shock end-of-chorus turn-around and one of the best snare-flamm, bass-drum breaks on any rock song, ever. “Da-Boom, Da-Boom, Da-Boom, Da-Boom DA DA!!!” No one sounds or even thinks like Gene, no one ever will and this one proves it.  What you have in LTL is signature, A1 Simmons, basking not so sheepishly in the glow of KISS’s 70’s supremacy. It’s nothing short of a rock & roll masterpiece.

TWO TIMER – Dressed To Kill – Dressed To Kill is always overlooked when folks talk about the early stuff but it is, if a little short in length, a good rockin’ time. Funny though that Gene should be the one calling the kettle black but that’s exactly what we get on this rrotsy rocker. Juxtapose this with the sentiments on “Ladies In Waiting” on the same record and you have Gene’s split personality. His walking bass line shows he listened closely as young player and learned his lessons well. “Two Timer” is steeped in old school song craftiness and is the kind of thing that you could hear coming from other bands which, lets face it, you can’t say for many Gene songs. Plus, vocally he pulls off a Louis Armstrong-like richness with so much personality and believability that one has to say aloud “Geno!” The lyrics are fun too because, for the first time, Gene’s on the losing end complaining “she tells me she’s high fashion, she thinks she looks divine, and  that’s what I keep telling her, I tell her all the time” lol..  As the song fades, Gene raps “that’s the truth baby you’re a….”, in what sounds to me like a nod to the hip vocal stylings of Hendrix in songs like “Cross Town Traffic” and “Foxy Lady”.

WAITING FOR THE MORNING LIGHT – A**hole –  Everyone tends to slag Gene’s solo efforts, inside the band and even in the KISS Army ranks; I don’t get why. Gene seems to have fun with them, taking chances more often than not and touching on genres no one would think Gene would have any interest in. Who knows, this song may be closer to the real Gene Simmons than anything else, especially if you are an aficionado of his early demos. In any event, it’s one of the very few sweet sentiments expressed anywhere by him and offers a glimpse of the lighter side of his ‘singer/songwriter’ upbringing. 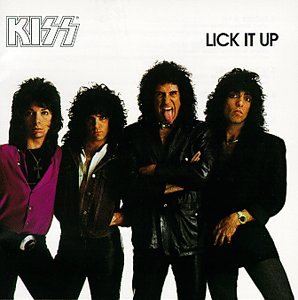 ******* Pick one – Lick It Up – LIU is a guilty pleasure on a lot of levels but, album title aside, it’s a balls to the wall rock record that declared KISS alive and well in 1983 and may have been the best hard rock record of the year. Still sounds fresh to me, although Paul sometime poo-poos the album for some reason. Simply put, it represents Gene’s best 80’s/ sans make-up outing, bar none. “Young & Wasted”, “On The 8th Dy”, “Fits Like A Glove”, “Not For The Innocent”, “Dance All Over Your Face” – sweet Jesus, it’s a Gene-a-thon that finds the freshly scrubbed Simmons lashing out in anger, fit to be tied and chomping at the bit. Makes one wonder what happened between LIU and Animalize to sour his enthusiasm because if you don’t have LIU (and Creatures of The Night for that matter), you are quite truly in the dark on the sheer magnitude of KISS’s scope. For example, “Young & Wasted” is KISS doing metal better than the real metal bands they had been forced to compete with to stay afloat. With the unmasking as a backdrop to the release, Gene’s tracks on LIU are an essential heaping helping of KISStory. “Not For Innocent”,”Fits Like A Glove”, and “Dance All Over Your Face” sound the charge for a new ‘unholy’ KISS looking for your daughter, reminding the listeners that Gene was back on the hunt while “On The 8th Day” defined KISS’ mission for the first time in biblical terms as the band soldiered on “through the heart of a brave new world”. Although the Dynasty tour was dubbed “The Return of KISS”, it was Lick It Up that saved the band’s ass and shows Simmons to be one of the heaviest musicians of all-time.