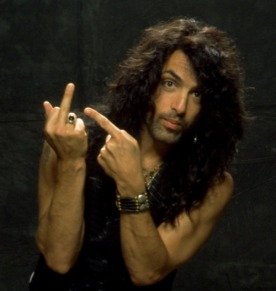 I just listened to Eddie’s rant about KISS manager / mogul Doc McGhee cancelling for Trunk’s show last-minute compliments of Metalfavs and left this unprecedentedly long comment  sharing my take on the YouTube.  And I don’t mean to pile on ‘cuz I do love Eddie; we all do. But, as Elton once said ” It’s a sad, sad situation. And it’s getting more and more absurd. It’s sad, so sad. Why can’t we talk it over?”

“as a long time music biz guy, the issue Eddie is having is that, as much as I am a fan of both he and KISS, Eddie wants it both ways. He gets to interact with artist as a media player and also wants to be friends with everyone in the band, and them all to allow whatever he says (on air).

By becoming an Ace & Peter mouth piece he broke showbiz protocol by getting as they say “too close to the artist”. It’s a mutually beneficial relationship without that, but Eddie needs more apparently? He has to be the #1 Kiss fan of all-time (and literally may be) but thinks that allows him to act differently than other media members do with artists, at least most successful ones.

Asking Paul to talk things out, and airing that out every chance he gets, is beyond the pale. Also, sharing Gene’s candid admissions on the subject is again a breach of that long-established understanding between artist and media. Same as with promoters. Grudges are bad business as a rule and space is at a premium. Ever heard the phrase “Are we on the record or off the record Eddie?”. That line, with Eddie, is blurred, and a bit embarrassing.

I can understand why Eddie feels he can do this because he was also in the real-deal actual record biz once as well as his being a long (suffering) supporter of all things KISS behind the scenes. But, I gotta tell ya, it’s not insane at all — It’s called showbiz and the first rule you learn coming up is know your role, who the star is and take only what you graciously get. But, to be fair, in KISStoric terms and others, Eddie’s had a charmed life it’s clear and has ‘Great Expectations’ by & large.

Eddie wonder’s aloud “what distorted information” Paul is acting on. He even regrets not knowing what is going on in Paul’s head day-to-day and yet has amnesia about dozens of interviews with Ace and Peter in which he has continually taken (their) sides and (worse) called in to question both Paul & Gene’s ethics.

I don’t want to sound like a KISStoric cynic but my guess is Doc was gonna cancel all along because he, and everyone in the KISS camp, knew Eddie was on a quest — damn it, he was gonna ask Doc “dude, man …what’s Paul’s issue with me man?”.

Goes to show there’s no business like showbiz! Nicely played Doc; Eddie’s been Stumped and now he’s been Punked!