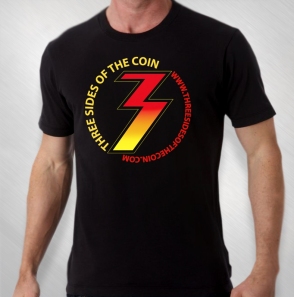 Oh, the power of the world-wide web. Three Sides Of The Coin, a 3-person hosted, low-fi, webcam podcast available on iTunes, their Youtube channel et al just celebrated their 50th episode and are hands down the definitive KISS podcast. If you live under a rock or just discovered Kiss, then take a deep breath and start working your way through their archive and CHOOSE ONE!  In a fractured ranks divided into many camps, Three Sides Of The Coin bridges the gaps and goes into the void, fists up, mending fences and finding common ground in understanding KISStory.

Since starting their three-sided fanatical volleys have been shared lovingly by KissAsylum.com, the Kiss fans long-standing stand-bye. Each show is just over an hour or so and they also have had some amazing ‘well-in-the-kno’ exclusive guests and, in a very short time, have managed to provide a one-stop-shop for the real deal in a no spin zone the descerning fan can appreciate.

The 3-Kissketeers, which includes the increasingly giddy renown rock critic Mitch Lafon, former Kissonline.com founder with the actual band KISS / marketing guru Michael Brandvold and, for no reason immediately apparent, Tommy Sommers, a regular guy real estate agent from Minnesota who brings it all down to earth here and there with the occasionally necessary “what a minute, can you explain?” 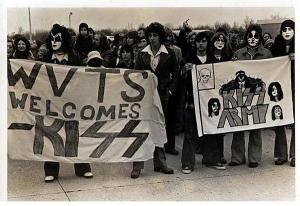 It all just works very well. They get along but also aren’t afraid to disagree and each has a unique perspective that works great in the simple three-window format which, to their credit, they could have done online without the visual. But instead, they bring us into their worlds in a format that makes it pretty hard to hide your feelings once you have watched someone for a bit. But, in their defense, there is so much to argue about!! And they do it for no other reason than that they are fans and what we get (for free it should be noted) is a glorious weekly intrusion into the psyche of three Kiss fans beyond help on the eve of what looks like Kiss’s induction finally into the Rock & Roll Hall of Fame and a possible re-union of the four original cats no less!

I imagine mega-fans of other mega-bands would do well to take note of the simple formula as a solid template. Our undaunted brethren have covered a lot of ground already but I am hopeful they can keep it rolling as long as they can stand because it’s helping LOL!!!  Not to diminish some of the great stuff that folks like KISSfaq.com, DecibelGeeks.com and podKISSd.com and others have done, but for me Three Sides Of The Coin has managed to capture what it is to be a card-carrying KissArmy member and deliver hot content week after week, especially with the enthralling guest segments like epsiode #50 with That Metal Show host on VH1Classic Eddie Truck.

Or watch this episode in which the boys “sit down” as it were with the first KISS (former) member Bruce Kulick to recognize the show for what is: perhaps the best place to talk Kiss and reach the real fans. My guess is it won’t long before each band member is coming on the show and my guess is the next man up will be either Ace himself or the new ‘Spaceman’, Tommy Thayer, who recently sent in a note to the guys that they read on the show. How would be cool to hear Tommy actually talk and see him interact so we can get to know him a bit more, or Eric Singer for that matter?