On the heels of the FBI’s recent misinformation campaign / release regarding Bigfoot last week, leave it to KISS to bring some levity to the situation … and this is super hush-hush but sources close to KISStorian.com are reporting that Gene & Paul have been orchestrating a chance to Animalize themselves and are soon to announce a partnership with A&E & Oprah to, get this, ‘find Bigfoot’!! While some are concerned it’s merely a diabolical plot to ‘Animalize’ more KISS fans into purchasing Paul Stanley’s new Pumas, this KISStorian thinks it’s high time!

Reached for statement via satellite the band co-founders & CEO’s Gene Simmons and Paul Stanley were characteristically glib about what the ‘nay sayers’ might opine:

“Why not KISS to find Bigfoot?… we don’t delude ourselves, but sometimes over the march of time things becomes real apparent, whether it’s with a band, a relationship or finding Bigfoot …it’s simple really ….sometimes one has to take things into their own hands if they want results, that’s why I produced the last two KISS records Sonic Boom and Monster, so they wouldn’t suck.….Kidding aside, I am quite sure Gene & I are not alone when we tell you that we have zero faith that Bobo or Moneymaker are the guys to find Bigfoot…. Frankly, we’d give Ace & Peter better odds; at least they’re nocturnal!(laughter) …..listen, KISS has always done things our own way, this is just a continuation of the core KISS principle that no one can tell us what to do, or what’s cool.. We are still cool, and so is Bigfoot .. I see it as an inevitable and yet natural marriage.”

Simmons didn’t miss a beat when he concurred: “We’ve made a living making magic but Bigfoot is one myth we think we can solve, or dispel … it’s gonna be big-time mommy … all those critics out there who don’t believe in KISS, or Bigfoot, are gonna be blown away when they see how the Demon handles this furry fella … we aren’t goin’ out there like (Sammy) Hagar the barbarian without a net …this is not kid stuff, this is serious business….this guy, if the reports are accurate, dwarfs me, even in my battle gear…….KISS is already known for bombast but this time I think the fans, and non-fans, will see our true stealth …..Right now it’ll be the initial 5 episodes on A&E, unless we find him sooner, and we certainly believe we can. Our KISS scientist are not to be second guessed, except by Paul & I, and that’s a …good thing”

When asked if new(ish) band mates Tommy ‘Spaceman’ Thayer or Eric ‘Catman’ Singer will be joining the festivities Stanley is his usual guarded if bemused self: “They are both naturals to help us too but we are working all that out ….to be honest, not everyone is as into the subject as Gene and I so, like everything KISS, it’s a process …that said, Eric truly is like a cat in the woods and Tommy does a have a few special powers that could be handy: for one he has been known to communicate with infra-sound on stage but, I gotta be honest, it’s Gene I am looking forward to seeing out there, out of his comfort zone … he’s not a big fan of bugs or tents or apex predators for that matter, wild hogs aside (more laughter) … we’ll see how it goes because, spoiler alert, Gene’s bark is bigger than his bite” chuckled the Starchild, adding defiantly: “see, KISS doesn’t take on anything unless we plan to do it right, so we will be on a mountain somewhere or down in a holler, whatever it takes, doing the dirty work, finding Bigfoot …there will be no room service… we may put Gene in charge of the plaster-casting of the foot prints” 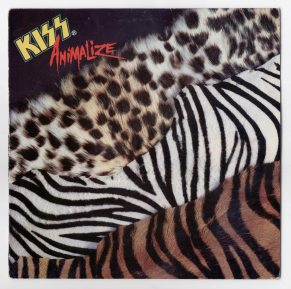 Lonley Is The Hunter

Hilarity ensues as the Demon interjects laughingly: “Let’s be clear: it’s not me that needs to be worried, it’s Sasquatch, all of them … KISS is coming for you if you are tuning in ‘Sas!! …“pay-up or miss the show big fella —- I am bringing my Gene Simmons Axe Bass!”

When asked if KISS’s foray into Squatching is a ‘no-kill’ enterprise, Stanley took the question as Gene leaned back in his chair with a deep sigh: “Look, no one wants to get hurt out there …KISS is about having a good time, leaving your troubles at home, and sometimes that involves tents and BBQ’s and a Bunsen burner, so what?? ….we’ll have fun either way. To think that KISS wants to kill anything or anyone is the height of absurdity … I am not saying we won’t defend ourselves if we have to…..we just want to give Bigfoot a chance to introduce himself to KISS fans world-wide, and that’s what we are going to do. Like it or not, it’s a KISS planet and Bigfoot is now just another part of it …there’ll be a video, a new single “Squatchy Lady” and some other surprises ….a cartoon adaptation and so on …..we can’t say too much right now”

When asked how Oprah might figure in the effort, Gene was quick to dot the i: “C’mon …everyone knows KISS have had a long and happy relationship with Oprah and she wants to help us find Bigfoot? ….should we have said “No Oprah, you can’t help us find Bigfoot?!” ….Oprah will be our eyes and ears and I suspect a calming influence in camp as well as a big help managing the considerable logistics, and ballistics, of such an undertaking ….So, yeah, again ….it’s an exciting time to be KISS! …it was this or a one-way trip to Mars! …even KISS has to make choices and we are staying on earth for the time being”

Reached for comment moments ago, former-KISS members Ace Frehley and Peter Criss were less jubilant about the impending Simmons/Stanley announcement: Frehley joked “Who knows? maybe they’ll finally find a replacement for Gene out there?” and Criss vented “God save us all …I hope they do find Bigfoot and he kicks their asses!” – KISStorian