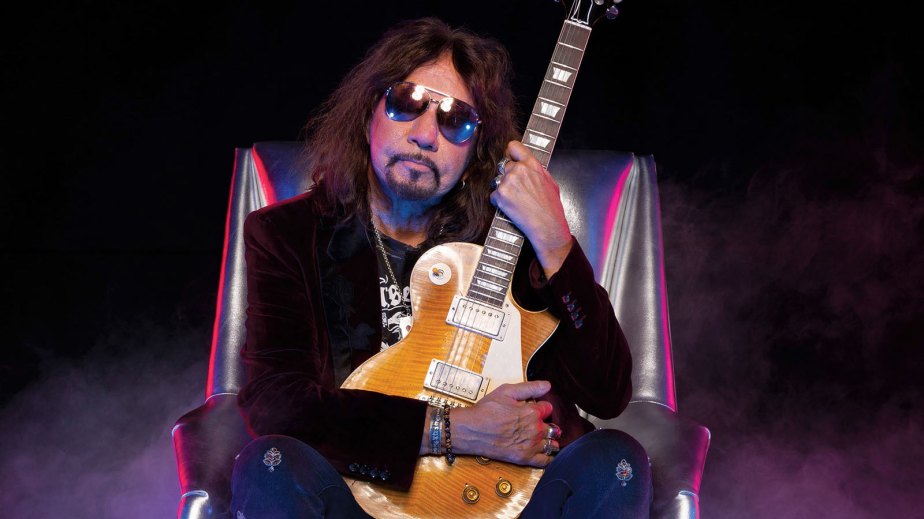 Now that the gloves are off, I thought it a good time to finally weigh in on the ever-rocking Ace Frehley‘s latest voyage, the self-produced Entertainment One release Spaceman, yet another aural sortie that finds the celestial one in a good place making vibrant new rock.

If you’ve been hiding under a rock, or have given up on new rock & roll altogether, you may need a wake up call — Ace Frehley is one of the few old school true hard rock cats left carrying the torch with any efficiency. In the past decade, Frehley has put out (countem’) four albums, all with stellar cuts & euphoric rock moments worthy of his ever-ascending pedigree and any playlist.

Reality is, a lot of folks sold out, gave up or can’t quite give a fuck enough to figure out how to get their fans new music. Ace …you know, the notoriously lazy drunken lay-about, decided when he got truly sober years ago to take over the main command deck, learn the new tech cold and bring it on home ….to his home studio. He’s cut out the flack and has been doing what he loves to do most, and you can feel it in his records; Ace is in his element. With what he’s endured, it’s a miracle he’s alive, not jaded and is still in love with rock & roll.

Spaceman may not be the very best of the four, but it’s f-close at moments and is as endearing as anything he’s ever released. In fact, when the final chapters of KISStory are written, I believe there a number of songs, sentiments & performances on Spaceman that will end up as major notches on the time capsule.

Relistening to it here today, a smile came over my face as I found myself breaking on through the turbulent atmosphere to the other side …kinda like the gravity that used to hold me down somehow just didn’t exist no more?!

The album features long-time, par-excellence Ace Frehley Band member Scot Coogan on drums on most of the record with the exception of the re-appearance of Anton Fig on “Pursuit of Rock & Roll” and guest jams by Matt Starr on “Rockin’ With The Boys’, “I Wanna Go Back” & “Quantum Flux”. Ace plays most of the guitars and bass, minus Gene SImmons’ singular playing on “Without You I’m Nothing” …count down’s comin’ on, here we go:

WITHOUT YOU I’M NOTHING > A ballsy, earnest rocker co-written with former band mate Gene Simmons that wouldn’t have worked (ie – been convincing) coming from Simmons or KISS. Frehley though knocks it out of the park with a great lead vocal, edgy semi-autobiographical verse lyrics and a bitchin’ solo that quickly re-affirms why you developed a taste for the Blue Koolaid way back.

“Now through the years, I’ve hit some walls, with no regrets .. when we’re apart I get the blues””

ROCKIN’ WITH THE BOYS > More straight talk from Ace delivered with customary ‘don’t sweat it’ chill. This one grows on you like a new pair of favorite jeans and the comfy feel continues into the solo as Ace eases back on the throttle, laying in behind the beat to get ‘back’ in NY groove.

“We’ve had our differences, now don’t make a fuss, we’ve had the best of times”

YOUR WISH IS MY COMMAND > Co-written also with Simmons, ‘Wish’ features a similarly luke-warm Simmons chorus / title benefiting again significantly from Ace’s well-honed pop sensibility on the verse melody & lyric. An ill-fated reunion of sorts, no surprise this is the only tune on the album that feels a little forced. Like with most old flames, you often find once is enough.

“Seen many miracles, don’t be concerned, so few are chosen”

BRONX BOY > More street cred and a great P&L statement from Ace that takes us back to the ‘hard times’ as a teenage gangbanger that he may not have escaped were it not for his guitar & considerable swagger, drunk or sober!

“I’m just a street kid, we seek and destroy, I lived so much of it, I’m just a Bronx Boy.”

PURSUIT OF ROCK & ROLL > A rock anthem to rival KISS’s many arena driven-forays over the years. Ace’s ‘State Of The Union’  is a rocket ride with Anton Fig burnin’ up the drum kit and Frehley high on the fumes, literally shouting out to The Rolling Stones, Elvis Presley, Chuck Berry, Little Richard and even The Beatles.

“Don’t want no strife, ‘cuz it’s the enemy, that gets into your soul”

I WANNA GO BACK > It’s almost impossible not to love this cover of the Eddie Money hit. The choice, and Ace’s delivery of the bitter-sweet Money lament, is flat-out charming, further illuminating Ace’s range and deep love for a great hook, regardless the artist or era. It wasn’t a guitar tune until now, and it’s a fucking cool departure.

MISSION TO MARS > Were I Ace’s manager I would have tapped the glorious  “Mission To Mars” as the lead single (or “I Wanna Go Back”?) as it’s perhaps Ace’s best vocal since “Rip It Out” and tracks us on radar somewhere between ’74’s “Parasite”, ’89’s “Lost In Limbo”, 2009’s “Outer Space” and Elon Musk’s flying Tesla. Wonder how many times Frehley left the pavement in his DeLorean?

“My ships off course, by some unknown force ….Between heaven and earth, you know we’ll always be first, and that’s why”

OFF MY BACK > Even if it’s now clear Ace never heard Spinal Taps’ “Bitch School”, this tune is super catchy and boasts the hottest solo on the album. If not Ace’s rawest Frehley fret  attack ever from the get-go, the solo outro shifts to urgent blues phrasing reminiscent of Leslie West of Mountain or Rory Gallagher!

“We go in circles with no end in sight”

QUANTUM FLUX > The closer is, as is tradition for Ace, a continuation of the instrumental epics that started in ’78 with the haunting powerhouse that is ‘Fractured Mirror’.  No exception to the fleet, ‘Flux’ is transcendent and takes Ace and us out of orbit into emotional time-scapes, reverberating key influences Jeff Beck & Jimmy Page while remaining pure Ace Frehley through and through.

The crazy thing is that, with Ace, you can go back. He still gives me that feeling. There’s ‘Space’ on board …Ace’s got you.

It was back in the winter of ’94, there’s a reason I remember it well …it was Ace at The Avalon and he was slippin’ & slidin’ on a “Rocket Ride” to hell.

I left the show seriously concerned about Ace. Believe me, at the time it seemed there was no way that KISS would ever re-unite. In hindsight, it’s possible their doing so may have saved Ace’s life.

Reports from Ace’s booze-soaked ‘Just For Fun Tour‘ must have had Gene Simmons & Paul Stanley starting to think it’s ‘now or never’. Especially so when intel on the subsequent Criss/Frehley ‘Bad Boys Of Rock Tour’ pairing had similarly dark forecasts for both the Cat & Spacemen.

But whose kidding who? Whether Gene & Paul had always known they would reunite at some point or not, both Ace & Peter’s camps we’re aiming at the same reunion Yahtzee. As it turns out, the perilous road bender worked, forcing KISS’s hand, one way and another.

Anyway, by the time Ace finally hit the stage an hour late, The Avalon was a scene of KISStoric anguish. It was f’ing freezing outside, but it was hotter than hell in the club as the low ceilings in the over-packed room drove the temperature up. As folks got restless, pre-show chants of “Fuck You!” bubbled up, rivaling the fading “ACE!! ACE!! ACE!!!” flurries as Rock Soldiers started to suspect Ace was “around the corner at the liquor store” (or worse).

We later found out from the Avalon booking agent that Ace had had to be carried up the Avalon’s long backstage stairs by a couple of guys. Rumor is Ace’s ‘team’ couldn’t find him and didn’t realize that he had been passed out in the back of their Ryder truck, parked right outside on Sheffield.  Had they not found him, he may have frozen to death.

After the opening tune “Rip It Out”, Ace stumbled to the mic bewildered and said (no bullshit) “I don’t think I’m gonna make it”.  He was partly referring to how hot it must have been on stage but, given the situation, it was a ‘loaded’ statement.

Again people started cheering and jeering Ace simultaneously. Anguished cries came out from all over …”We Love You Ace!” …”You Can Do It Ace!” …as well as “Fuck You Ace!”. It was as close to a KISS Army mutiny as I have ever seen.

KISStory tells us that although Frehley has ‘Trouble Walkin’ , he usually lands on his feet. In this case, he gets bye with a little help from his friends because, had the original four not come to terms a couple years later, I fear ‘Mr. Excitement’ may have taken a rough trajectory post ’94.  But perhaps it is as the Spaceman himself suggests in the tune “Immortal Pleasures” off Space Invader — he’s always been “protected by the powers”.  Maybe the Talismen?