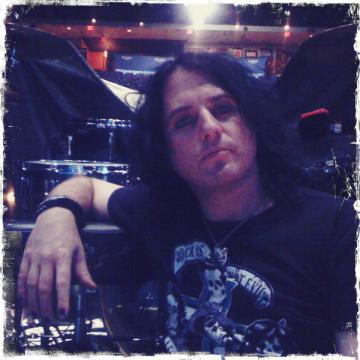 1.0 – When did your love affair with the drums start?

I was about 5 years old, went to my Uncle Frank’s house and saw a real drum kit set up. The Beatles “White Album” was on, guess I didn’t see any sticks around, so I picked up a Barbie Doll Leg and a Lincoln Log. I started hitting the drums in time with the music, after that, all I wanted to do was play drums!

When I  was 11 yrs old, my dad bought me a used mid 70′s Butcher Block Maple Ludwig Kit. I still have the kit, it’s very sentimental to me. I use it for recording sometimes. It’s in mint condition.

Hands down, The Beatles.

Besides hairstyle, nothing compares to… lol. Ok, seriously, they each have a completely different approach and style to their music. Sinead is a melodic pop artist, Lita Ford is the Queen of Metal, her tracks are more guitar driven. Interestingly enough, I performed with both artists during a time in their careers when they were making a come back of sorts. Sinead’s “Faith and Courage” was her first original release in three years. Lita’s latest effort “Living Like a Runaway” is a return to her rock and roll roots. Both women are very empowered by their music. They both pour their heart and soul into their songs and performances. It has been a pleasure and an honor to work with each of them.

5.0 – How did your gig with Ace Frehley come about and what was your favorite part about working with him?

I flew to New York for the audition with Ace 2007 and he offered me the job immediately. Besides having the opportunity to perform and interact on a regular basis with one of my childhood hero’s, I would say singing lead vocals while playing drums for a good part of the set list was my favorite part of the gig.

6.0 – Drummer jokes aside, do you have an overall philosophy that you bring to the table as a musician?

Yes, music for me is about feel, emotion and personality. Whether I am writing music on  a piano or an acoustic guitar, I find that creating a melody, which moves over chord changes, while establishing a proper drum groove is the foundation for a song.

7.0 – Do you have a pre-show ritual to get you in the right frame of mind for a show?

Before a show I stretch, warm up by doing rudiments on practice pad, perform vocal exercises and drink hot throat coat tea with honey.

8.0 – “Moby Dick” aside, what are the three hardest Led Zep tunes to get on drums?

I would say these are the most challenging:

1. “D’yer Mak’er” because there is no consistent or repeating pattern.

3. “Fool In The Rain” because it’s one of Bonzo’s sickest shuffle drum grooves next to Bernard Purdie and Jeff Pocaro.

9.0 – What advice would you give to a younger player joining a veteran touring act?

It’s a great opportunity to work with veteran artists, you can learn a lot by LISTENING and use this experience to further your career. Have a positive attitude, perform your best at each show, be respectful of space on the tour bus and BE ON TIME.

10.0 – You are given one free time-travel-ticket to any concert in history, what are your coordinates Scot?

January 26, 1969 Led Zeppelin at the Boston Tea Party in Boston, Mass. It was the last of four nights at the venue. They only had an hour and a half of music to play, but they performed four and a half hours. They played their set twice and then did music by The Who, The Rolling Stones and The Beatles. Epic Concert!

Visit Scot online at, you guessed it, ScotCoogan.com or say hello on Facebook