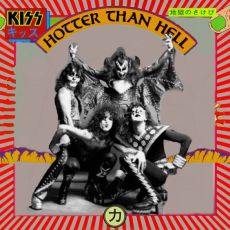 Who better than KISS to round out a 40-year catalog with no less than 5 songs with HELL in the title.  Indeed with KISS, even “Heaven’s On Fire”.  Like a lotta rock, KISS bleeds biblical references, consider offerings like “‘Thou Shalt Not”,  “On The 8th Day”, “Unholy” and “God Gave Rock & Roll To You”.  KISStorian ranks KISS’s journey ‘Runnin’ With The Devil’.

HOTTER THAN HELL — Street-wise Stanley burns ya like the mid-day sun … KISS’s industrially murky “Cross Town Traffic” has one of the best outros in rock history with the duel-panned Frehley solos wailing out on the fade … Yes, HTH is as close to KISS HEAVEN as HELL gets, rivaling ACDC’s “Highway To Hell” as the best rock cut with HELL in the title, all-time. The groove on the live version on Alive is KISS at it’s very best …rip rip, rip & destroy!!!

ROCK & ROLL HELL — Gene seems to think it’s his destiny, whether he wrote it or not, and sings RR HELL like he owns it,  perhaps because he really did want out of the KISS biz circa ’82. Certainly Ace left to save his soul, leaving Dr. Love to contemplate who was Saint and who the Sinner. One could argue that Creatures of The Night marks the Demon’s final serious salvo …soon he would wander the wastelands, no longer Lord.

I’LL FIGHT HELL TO HOLD YOU — Pure 80’s super-Paul travels to the brink to be bye your side in this diabolically good Crazy Nights cut…There was never a video made for HELL TO HOLD YOU, but one can easily visualize it’s cinematic MTV potential appeal …I see Paul braving heavy terrain, high winds, torrential rains, eventually reaching the mountain top, searching for the lost Xanadu. The Starchild has our backs.

HELL OR HIGH WATER — Gene’s best cut off Crazy Nights and my favorite Bruce Kulick rock hunt, HELL OR HIGH WATER may be the only Simmons song in which he admits having his feelings hurt. But nobody puts Gene in the corner, he let’s you know in the festive, feel good doo-wop bridge ….”Baby don’t doubt it, ain’t no doubt about it” …considering he’s willing to brave HIGH WATER potentially, I find it down right heart-warming that the ‘Man of 1,000 Faces’ considers facing HELL to boot if need be.

SOMEWHERE BETWEEN HEAVEN & HELL — Gene’s put you in purgatory, and he’s so hungry… ‘SOMEWHERE’ somehow worked on Hot In The Shade but the lyrics are so cheap novel cliche Simmons, and the hook so KISS sleepy, that it made us all long for days of yore when Gene was a Demon, not the ‘Albatross’.